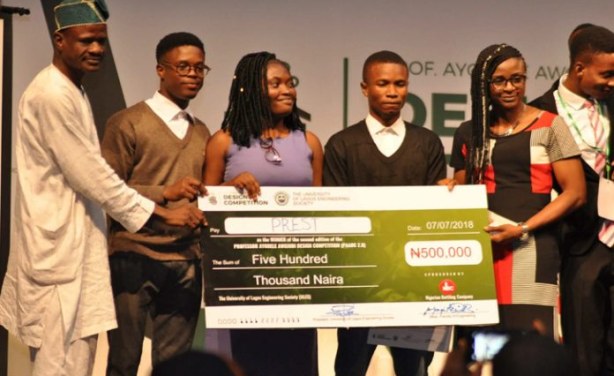 Five students from the University of Ibadan have won N1 million at the Professor Ayodele Awojobi Design Competition (PAADC) for a solution that leverages robotics and Articificial Intelligence (AI) to solve societal problems.

Hive, an Andela-like students-led learning community that builds robots to solve Nigeria’s social problems while teaching relevant industrial skills won the keenly contested competition at the third annual edition of PAADC, held in Lagos recently, beating 49 other teams from 20 African tertiary institutions to clinch the grand prize, as well as pro bono venture building and mentoring support. They were all funded by Verraki Partners, a business solutions company focused on accelerating the development and transformation of Africa.

Vice President, African Capital Alliance and chief judge of the contest, Chinaza Onuzo, commended the top winners of the design competition, stressing why Hive won the grand prize. According to him “The fact that the project has very clearly defined ambitions has gone a long way in securing the bag. Much more than I expected, we might be looking at our own iron man.”

The first runner-up was Team WantToPrint, from Obafemi Awolowo University with an online platform that connects students to printing houses on campus and allows them to save time while, Team iGlass from Ahmadu Bello University which, created a visual assistant for visually impaired citizens, students especially, was the second runner up. Their invention – iGlass takes instructions from the visually impaired user and converts it to actions such as surfing the internet and giving information about the environment.

The third edition (PAADC 3.0) themed: “The influence of innovation and technology in a progressive society,” featured over 2,300 engaged participants as well as leading academics, technology and start-up founders.

Read the original article on This Day.