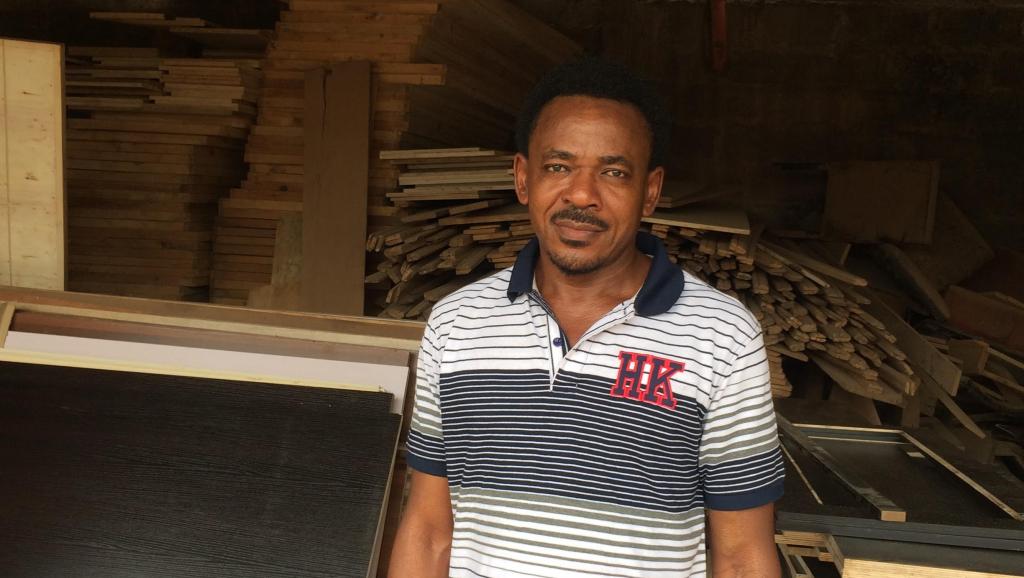 In an unmarked workshop not far from the chaos of Lagos city is where you can find Femi Adekunle: a carpenter who specialises in making furniture and cabinetry.

He moved his workshop out here to meet the growing need for space as his shop in the city was too small; a good sign that business is growing.

“I don’t really believe in luck,” says Adekunle when looking back at the success of his business. “Luck is when you didn’t do much and then you make a lot [of money]. That’s luck. But I believe if you invest in something then you expect the returns.”

And his case is one of working hard.

He got into this line of work as a fluke. It was a time when he was unemployed and he thought about doing something else, “and this was all I could lay my hands on”.

He was employed in a big foreign company in Lagos in 1994. But at the time, he was simply working for them, not actually learning a trade. “I went there to work and get paid. I saw things and I said to myself why not, if I can pay attention to this, I [might] starting making things like this.”

After some thought he approached his bosses and made them an offer.

“I don’t want to get paid anymore, I want to learn these things,” he told them. And they agreed to take him on for an unofficial apprenticeship. “In a matter of two years, I started doing things myself in the same company.”

Soon after, he began working again for the company with pay. After a year and half, with some money now saved up, Adekunle decided the time was right and he bought himself a little workshop in Lagos.

“I bought a couple of hand tools that my money could buy then and set up a little workshop.”

If you build it, they will come

Now an independent employer, the first thing he crafted in his new workshop was a small kitchen cabinet. “Actually, I made it to take home, for my own use”, but before he could take it home it had caught the eye of a potential customer. Some price negotiations took place and it was sold. “It started right from there. Ever since, I’ve never stopped,” says Adekunle.

There are no adverts, or flyers. He doesn’t have a marketing team. The best way to build loyal customers is through the tried and tested word of mouth.

“From one customer to another customer, ‘Who did this for you?’ ‘Oh, I have a good guy,’ and they introduce me.”

And for nearly 30 years, his work has grown this way.

But he still remembers what it’s like to be on the opposite side of things.

“Employment is a big problem in this part of the world,” explains Adekunle in all seriousness. If you advertise a post asking for 20 people, “at the end of the day you see about 40,000 people,” he says, noting the dire need for work can even become dangerous.

“I’ve even witnessed a stampede because people want to get employed.”

That’s part of the reason he knew he had to create his own work, otherwise he’d forever be competing with others or worse. “Nobody is creating any avenue for employment. But my best advice is: if you really want to be employed, then create the job by yourself. I created this.”

And on that note, he introduces me to a young 20-something and shy Victor.

As I walk away, the mix of older boys and young men go back to working the power tools. Over the years, Adekunle has improved the quality of his tools and no longer depends on his hand tools from the early days.

“Working is now faster, you can really get a job done in one day,” he exclaims, as he shows me the electric saw. “So in this job, it’s not really luck. It’s been the result of how far I’ve come with the work.”