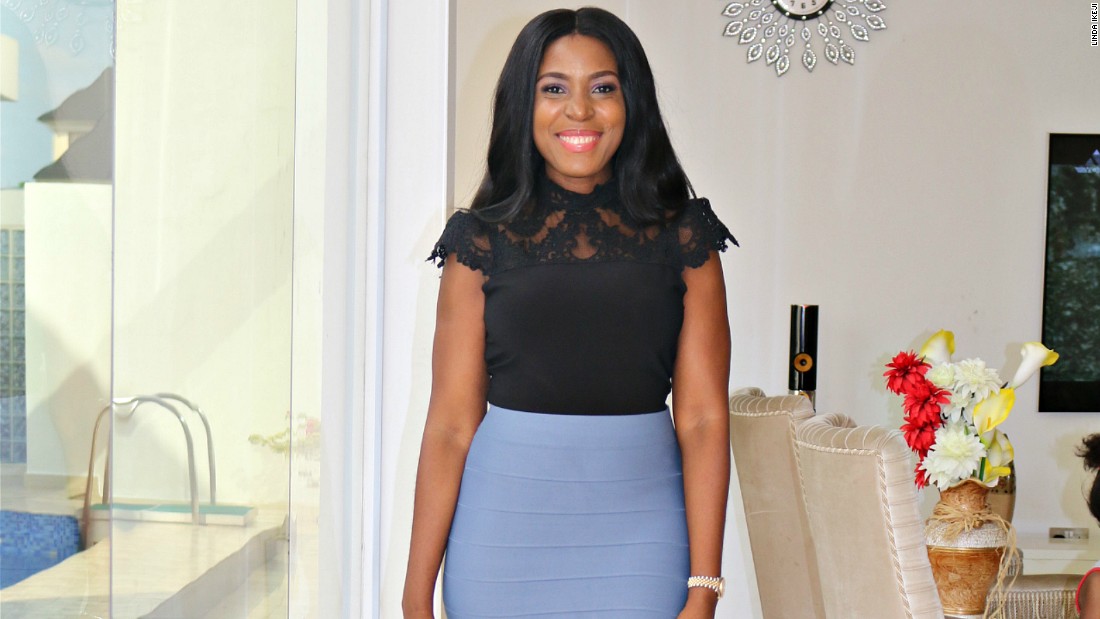 Think about a fine piece of art and The Mona Lisa probably comes to mind. Think about World War II and you probably have Hitler and Hiroshima in your mind’s eye. Think about blogging in Africa and no else gets the cake but Linda Ikeji.

Yes, that’s how much clout the 38-year-old has gathered since taking to blogging in 2006 – something that was more of a hobby at the time. Today, her position as the most successful and highest paid blogger on the continent is undisputable.

Few are as bold, tenacious, determined, and resilient as the former waitress, bartender, usher, and model whose meteoric rise to fame and fortune, if chronicled, would make the consummate information resource for a crash course in “never give up.”

For both admirers and critics alike, there’s no taking away from her success. She went into blogging when it was still pretty much an unknown in Nigeria – not many people knew about it and those who actually did wouldn’t touch it with a ten-foot pole in a gloved hand.

Now, the whole thing has morphed into a venture that has helped her build a fortune worth billions (at least, in the local currency), and she’s certainly living that good life – you’ve just got to scroll through her Instagram page these days and you’ll get the idea in between loved up clips of her and adorable son, Jayce, some shots of her string of properties, laden closet, and garage, and perhaps some takes from any of her many luxury vacations.

Yes, Linda loves the spotlight and she probably has a penchant for showmanship too, but how much privacy can one really afford if he/she is to make a killing out of blogging? A profession that is, in fact, publicity at its core? Well, if your answer is as good as mine, then it’d probably make sense that she’s come this far.

As part of events marking this year’s International Women’s Day Celebration, Linda Ikeji was amongst a crop of wonderful women who were invited to speak at the 2019 Leading Women Summit organised by Forbes – an event that took place in Durban, South Africa.

Linda Ikeji may have actually built a fortune out of making things public but ironically, addressing formal gatherings like this one isn’t one of her strong suits as she herself admits to how jittery she gets in such situations and how much she tries to keep herself out of it altogether. Hence, she could be seen in several one-on-one interviews but you’d have to really dig to find her on a stage like the one in Durban.

And when she descended the stage on that morning of March 8th, she was serenaded by warm applause having let the audience in on the travails and triumph of her inspiring entrepreneurial journey. If there are any take-homes from her submission, it would be that she had it really tough. And if it looks like she’s living “la vida loca” at this point, she thoroughly earned it.

Born into a struggling family of nine (the second of seven children) in Nkwerre, a Local Government Area in Imo State, South-Eastern Nigeria, it was anything but a childhood of cookies and candies. They weren’t exactly feeding from hand to mouth, but they struggled with bills and making ends meet was basically a tug-of-war.

Even though it wasn’t the best there was, her parents were able to afford her some elementary education and Linda may have made the most of it.  At age 10, she had developed a knack for putting words together, scribbling those sort of short fictional stories that form in every little girl’s mind – nothing of the Chimamanda Adichie sort; just crude, basic stuff.

Then, when she moved on to high school, she found herself quite taken by news reporting and interviews. Thus, it was kind of a given that when it was time to fill out college enrolment forms, a degree in mass communication at the University of Lagos called out to her like a fervent preacher on a pulpit.

But that was not to be as she was only offered admission to pursue a degree in English Language. It came as a disappointment but she took it in her stride and forged ahead.

Linda Ikeji was 19 during her freshman year at college. At that point, her family’s finances had reached an all-time low and there was no point calling home for funds – and that’s mostly because there was none to ask for.

Before long, she took the initiative and began to fend for herself. She tended bars, waited tables, and ushered at occasions to raise money to offset some of her academic bills. By now, there was a certain poise, diligence, and air of confidence about her due to the nature of the jobs she took.

The ushering job had also helped her develop some kind of elegance and people skills and soon, she began to try her hand at modeling. She certainly possessed the looks and the eye for fashion, but her stint at modelling was, however, a short one. In between not getting reasonable pay from the then underdeveloped modeling industry in Nigeria and having to fight off many ‘sharks’ who were spoiling for a bite, she’d truncated her own modeling career before it ever really began.

To keep young girls like herself from having to deal with the same challenge, the first thing she ventured into post-college was to set up a modeling agency of her own. She called it Black Dove Communications – a name she reportedly coined from ‘Silverbird’ – but even though she had the best of intentions, it wasn’t long before she had to close shop due to lack of profits. Apparently, she had learned the hard way that businesses need more than ‘best intentions’ to thrive.

This failure was to mark the beginning of a period during which the Nigerian entrepreneur tried her hand at several formal and informal businesses, hitting a brick wall in every single one of them.

But Linda Ikeji was wont to throw in the towel. She could have taken the easy way out by ‘marrrying her way out of the job market’ like most girls her age were forced to do during those times – and perhaps even now too – but she found her dreams to big to give up. Hence, she stuck to her guns and continued in her pursuit of financial independence.

Linda Ikeji’s entrepreneurial mindset soon led her into magazine publication. Her idea was to put together a lifesyle/entertainment magazine that would sit well with Nigerian readers and she was determined to pull it off successfully having suffered several failures prior.

The primary goal was to sustain the magazine up to its fifth issue, as many people in the industry had assured her it got better from there. Being that she didn’t have the money to see it through on her own, she approached a local bank for a short-term loan and got USD 1 K.

Her intention was to pay back the loan as soon as the funds from advertising and sales had started trickling in but to her dismay, not a single copy of the magazine was sold after publication. She’d ruefully miscalculated. Now, there was debt hanging on her neck and no means to clear it.

By the time the grace period on the loan had expired, she had been able to pay back only half of it and things had gone from bad to worse for her financially. Linda recalls having to ask money from her mother time and again to keep head above water.

Things got even worse one morning when officers of the anti-fraud unit stormed her residence (she still lived with her parents at the time) to nab her for defaulting on the loan she took from the bank. She was brought in for questioning and threatened with lockup.

This was a difficult time. She spent over 8 hours at the facility and was passed around to different officers who were deaf to her pleas and had only harsh words for her. It was only after she signed an affidavit stating that she’d pay up the remaining sum within a month or risk actual pick up and lockup that she was she let go.

Linda Ikeji considers this one of her lowest points. She was both distraught and devastated at the turn of events. At the Summit in SA, she did reveal that she battled with a bit of depression during this time and almost quit.

But there comes a time when one must decide whether to take lessons from an unfortunate situation and use it as fuel for the next drive, or wallow in self-pity and get consumed. Linda Ikeji opted for the former.

“I was determined to fight poverty in my life. Never again would I let money cause so much shame to me,” she says.

She adopted the magazine fiasco as a teachable moment and went on to her next discovery – blogging – which, in fact, proved the gold mine.

“I discovered blogging and was determined to succeed at it. I worked harder than I thought was possible.”

There were so many late nights and early mornings, skipped breakfasts and abandoned suppers. She immersed herself so deep into this new venture that before she even realised it, she had become pretty good at it and was, in fact, pioneering entertainment blogging in Nigeria.

It’s amazing how things have changed since her run-in with the bank – for one who was once picked up for a debt of USD 500.00, knowing that some of the shoes currently in her closet cost more than twice that would undoubtedly put a wry smile on her face.

She started Linda Ikeji’s Blog (LIB) in 2006; a time when internet reach in Nigeria was no where near its current levels. She’d borrow money to pay for a few hours in cybercafes, where she’d chronicle only her personal life at first – something that was strange to many at the time. She didn’t have to be superb at her writing, she only had to dish a fresh perspective. And people loved it.

Then, she added entertainment gist and gossip, exposing the private life of many top personalities and celebrities in Nigeria. And she did find herself in hot water a couple of times because of that. Still, it was a hit as her fanbase only grew.

The blog has since grown into the centrepiece for entertainment and lifestyle gists, covering news and events happening in and around Africa and even beyond, with millions of visitors thronging the platform daily from all over the world.

As it stands, it’s as though she’s some kind of “Queen Midas” – everything she touches now just seems to turn to gold. Having conquered blogging, she’s gone on to set up other ventures which are proving just as successful. She caused tremors when she launched Linda Ikeji Social some years back and according to her, her current project, Linda Ikeji TV (an on-demand TV streaming service), is looking to rival Netflix for the African market.

Linda Ikeji is believed to be currently worth close to USD 15 Mn and rising. She’s big on philanthropy and women empowerment – her Self-Made Woman Project mentors young women and helps them set up small businesses of their own so as to be independent members of society. She also donates to numerous charities.

Although she has courted some controversy and attracted some vitriol on the journey – the most recent being the news of her pregnancy and childbirth out of wedlock even as she’s always come across as an advocate of absolute celibacy until marriage – there’s no doubt that she’s a role model and inspiration to aspiring entrepreneurs and achievers.

Her final words at this year’s Leading Women Summit were; “Nothing is impossible. You can become the best of the best. There’s absolutely nothing you can’t achieve if you believe in yourelf. Fight for your dreams. Don’t let anybody dim your light. Turn every challenge into opportunities for growth.”